The Smoke and Mirrors of “Authentic” Social Commerce

While Millennials brought social media to the forefront of society, Gen Z has been brought up in the picture-perfect, pressure-filled aftermath and now drives its growth and innovation. Fed up with social imposters, younger generations place value in transparent, authentic online presences. In one survey, 96% of respondents indicated that they ‘are willing to pay a premium for brands they deem transparent.’ However, the topic isn’t as black and white as marketers and data reveal. Here are three trends and examples of campaigns received as authentic, yet by textbook definition, are in a bit of a grey area.

These campaigns feel so real, the audience doesn’t even realize it’s an advertisement. 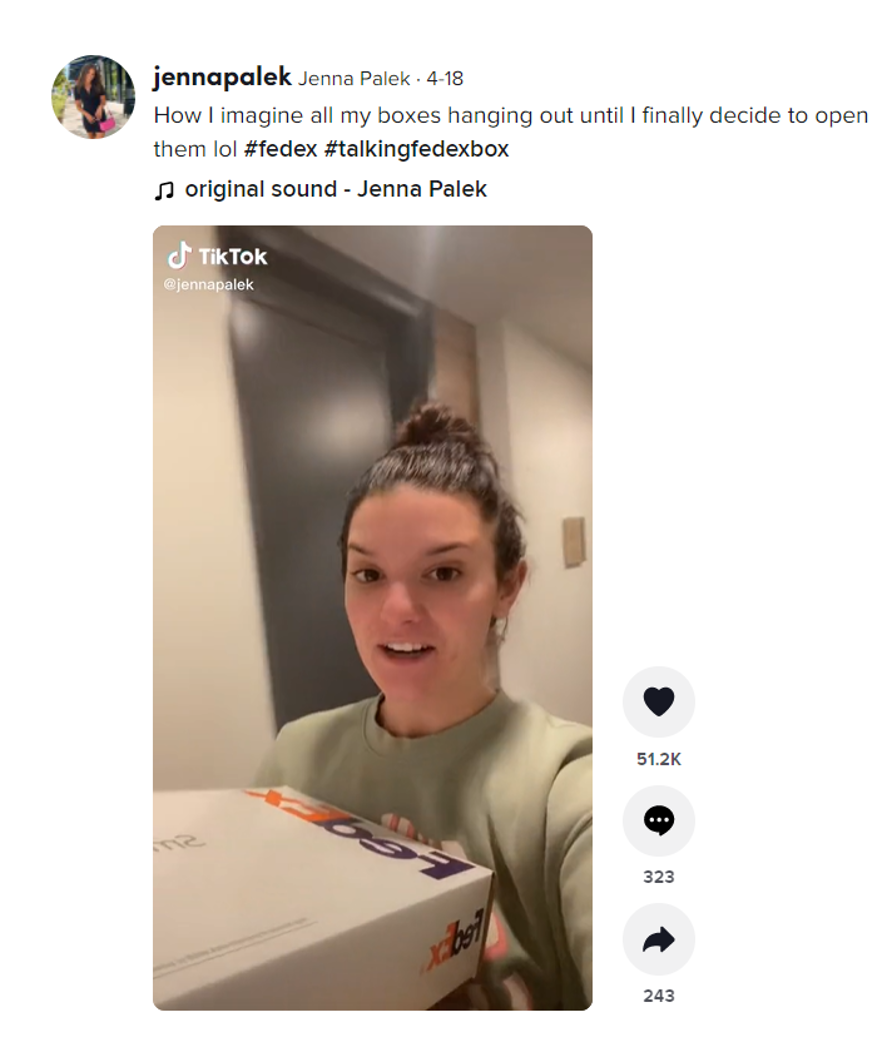 Ex-TikTok employee turned Influencer, Jenna Palek, partnered with FedEx in a short TikTok skit of her packages talking to each other. The video received over 1 million views. Commenters loved the content so much, Jenna followed up with a video letting everyone know it was an ad.

Fake or inauthentic information runs rampant on the internet, something Gen Z is more aware of than most. Although, tech savvy generations have come to outsmart a lot of these campaigns, it doesn’t make them immune to all the tricks.

These campaigns rely on the influencers knowing their audience as well as the content they like and are used to seeing from them. In addition, 52% of younger generations cite that they trust the influencers they follow. It’s clear FedEx gave Jenna creative freedom on this video and it paid off well. Jenna balanced the repeated logo placement to create brand awareness, while keeping true to her video style. These factors coupled with the shorter length of TikTok videos doesn’t give audiences too much time to question the authenticity of the content. These types of campaigns work great for brand awareness and keeping your brand top of mind.

Influencers seemingly reveal all the behind the scenes of the brand deal and their “true” attitudes about it, while in reality, it’s all a part of the campaign strategy. 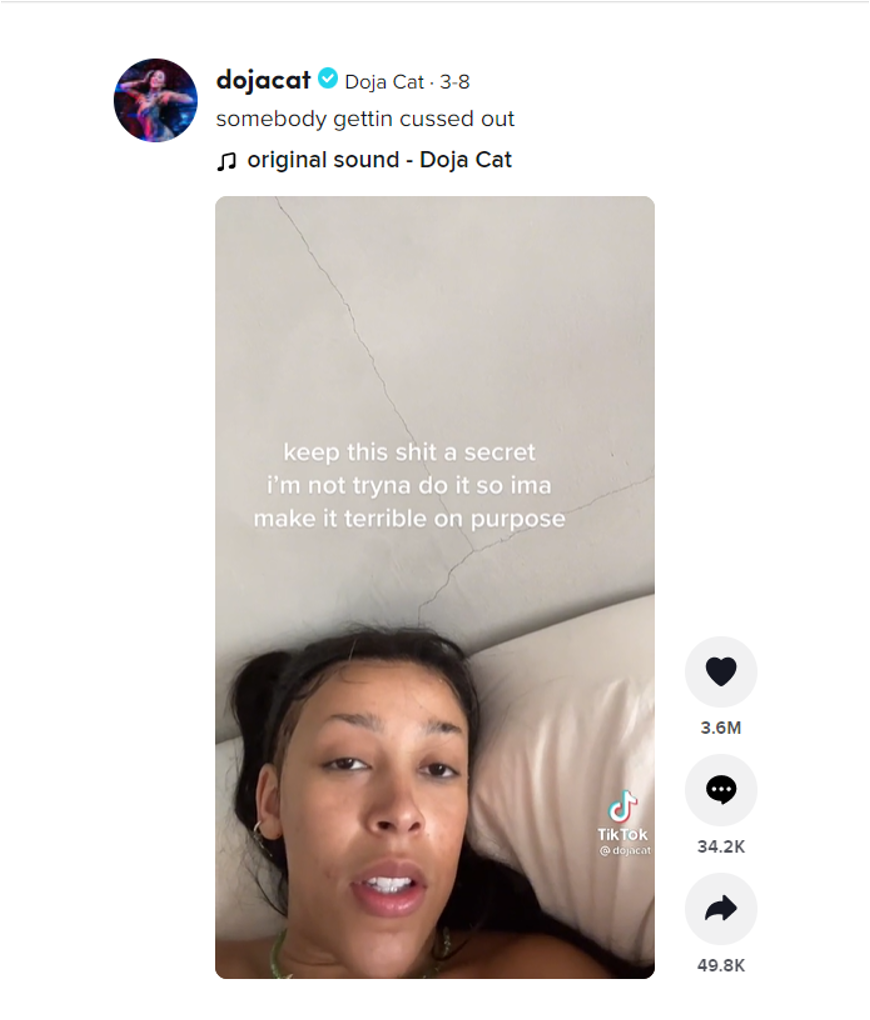 In a three-part campaign, celebrity rapper Doja Cat helped Taco Bell reveal the comeback of their menu item, the Mexican Pizza. Part one, came from a TikTok video in which Doja tells fans her next post will be a completely “contractual” brand deal. She quickly followed it up with said brand deal, posting an original jingle about her love of Taco Bells Mexican Pizza. Lastly, while on stage at Coachella, Doja Cat officially announced she was bringing back the beloved menu item.

It’s well understood influencers need advertisers to get paid and sometimes those deals involve less than ideal contractual terms or authenticity. This has always been a silently accepted reality by influencers, brands, and their followers. In this style of ad, it breaks the third wall, lifting the curtain on this behind-the-scenes relationship. It makes audiences feel in on the joke, and more like Doja’s close friend rather than a cash grab. Gen Z has been shown to be the loneliest generation, so they will latch on to any semblance of a close relationship.

Brands from different interests and audiences collide in a collaboration fans never knew they needed. 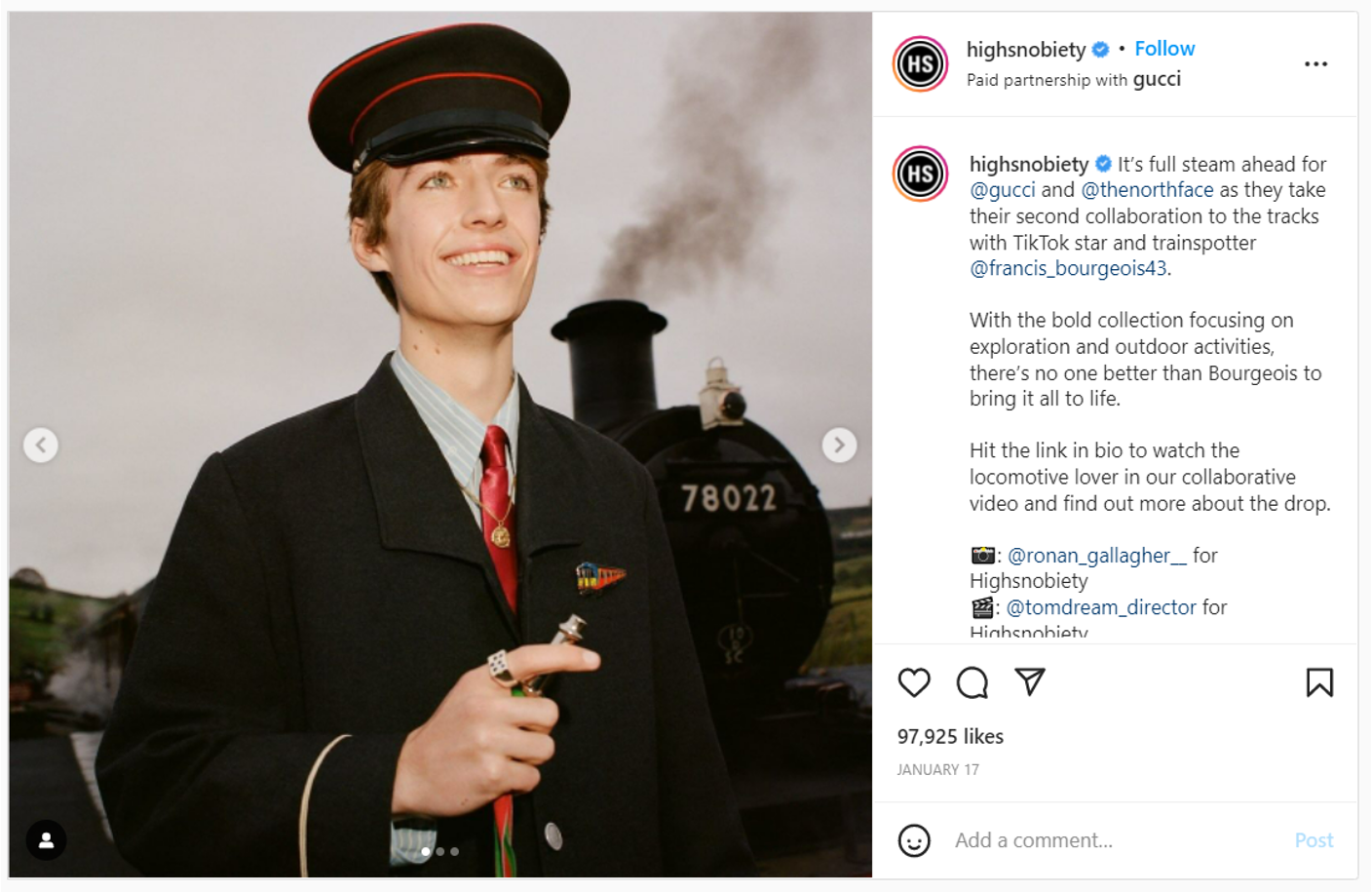 Gucci and North Face recruit TikTok star and trainspotter Francis Bourgeois for a creative video. Francis is known on TikTok for his gleeful train spotting videos. His brand was never associated with fashion or luxury goods. We’ve never seen him wear Gucci or talk about his wardrobe. Logically, there is no association and authentically the match isn’t there, yet the campaign was extremely well received. 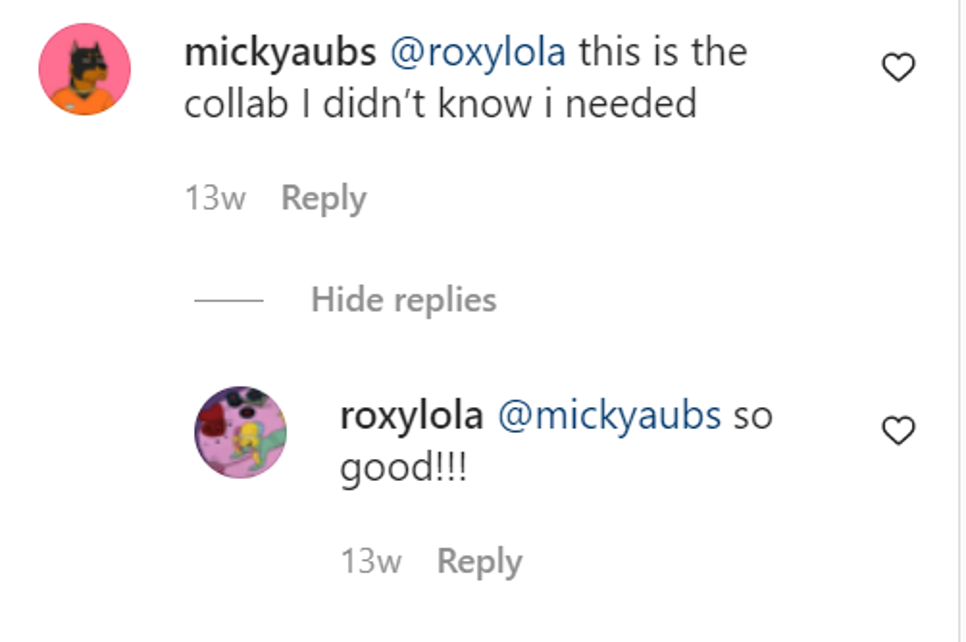 While Francis isn’t known for his fashion and Gucci isn’t known for their train admiration, this campaign was well loved by both audiences. The video styling played to the fashion brands luxury image, while the train scenery allowed Francis to be in his natural setting, perfectly blending seemingly different brands together.

Additionally, the campaign was delivered through the third party, HIGHSNOBIETY, which helps take away ownership from Francis. This is important because it makes it feel less like his idea or that he’s trying to be something he’s not. It’s also helpful to note, Francis is a universally loved influencer, allowing him to be accepted across niche interest groups.

As Gen Z continues to reshape consumption on social media, the biggest take away from these trends is how allowing the influencer to play a key role in campaign creation drives success. They know how to best speak to their audiences and make content appear “realer” than it seems. To reach the key target audiences of today, you must be ready to cede control.

OTHER ARTICLES OF Emily Staples 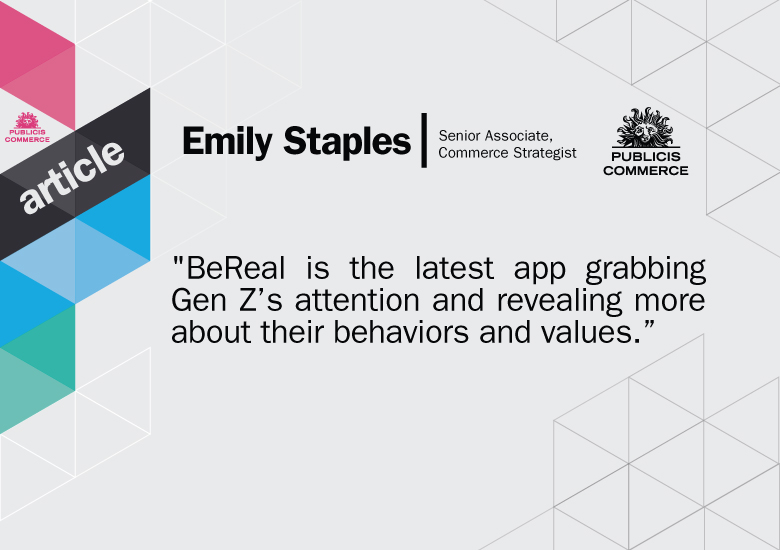